“James of Evergreen Landscaping is a professional landscaper with an old-fashioned work ethic. He’s on time and does what he says he’ll do. He takes pride in his work, listens to his customers, and combines their wants and needs to create “an aesthetical balance between design and function.”

James Bissonnette left home at fourteen. With a drive to survive and an opportunity, which came knocking, he became a partner in a landscaping business during his teenage years, but his long-term goal had always been to be an automotive mechanic (now technician) who owned his own business.

While making this dream a reality, James learned the skill of practical problem solving, but he also learned that he wanted to do something else with his life. He sold his automotive repair business and went to work for his previous landscaping partner. Gradually, he invested in the business, but he saw the potential to run his own “truly professional” landscaping business, so he started Evergreen Landscaping. Through his years as a landscape company owner, James has given back to the community by donating hands-on work to various non-profit organizations. The quality of his work has also benefitted from taking various seminars on hardscaping from such companies as Browns, Unilock, and Oaks.

During high school, James enjoyed studying art at Widdifield Secondary School in North Bay. He still enjoys creating landscape paintings using focal points. He uses this skill in landscaping. An example of this would be building a beautiful brick entryway to a house, which only had concrete steps before. It is gratifying to him to see the dramatic change his work can make. As a mechanic, he could make things run better and, therefore, more beautifully, but the beauty was rarely seen in the work. Now, as a landscaper, when his work is finished, “he can’t help but see the ‘wow’ in it.” 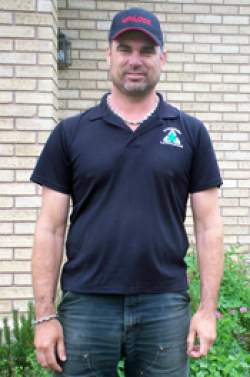